Before you read on I have a word of warning and a request. This starts out nice but turns into a rather dark read. If you read it and see Chris or me or reply on line please just be nice to us and hugs are welcome. Please don’t ask us lots of questions and please please don’t offer advice or suggestions of miracle cures or healers. However well intentioned neither of us will find it helpful. 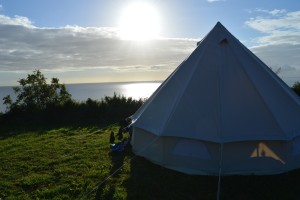 Two weeks ago I spent a fabulous long weekend diving on the Lizard in Cornwall with Chris and the Stratford dive club. We did eight wonderful dives, the last of which was my hundredth. The weather was fantastic. We camped just up the hill from the beach and our tent looked out to sea, the door facing the rising sun. We saw stunning jewel anemone walls, a thornback ray, cuckoo wrasse, shoals of pollack and scores of other unidentified fish and critters. Who ever said there is no life in UK waters?

When we got home I noticed I had a prickly sensation on my skin. I spoke to the doctor at the Midland Diving Chamber (MDC) who thought it might be a mild form of decompression sickness (DCI) called a ‘skin bend’. This doesn’t need treating but as I have had DCI before he recommended I have a check for a minor heart condition which is benign unless you dive. Two days later, on Thursday 18/8/15, the tingling got worse and I had some pains. I rang the MDC again and was treated for DCI. Before the treatment they found I had some neurological symptoms which improved after the treatment. They did a top up treatment the next day and the tingling came back which was deemed odd but not worrying and they discharged me.

They next day, Saturday 22/8/15, my friend Marianne was getting married to her lovely Eddie. I had an important role in the ceremony involving standing in front of all the guests for about ten minutes and two brief periods of public speaking at either end of that time. In the morning I noticed that my balance was a bit odd. I felt like I was swaying and having to correct myself. I wasn’t really worried, I thought it was just the DCI not quite sorted. Instead of standing for the ten minutes I just stood for my speaking bits and sat in between. I felt a bit tired but fine and it was a wonderful day.

By Monday 24/8/15 my balance was more of a problem and I arranged for further follow up treatment at the MDC. My balance improved over the Monday and Tuesday treatments but on Tuesday evening it deteriorated again. By Thursday 27th the treatment was making no difference at all and my balance was deteriorating dramatically. The MDC doc was completely puzzled. DCI does not get worse after treatment. The effects may not completely resolve but it doesn’t get worse. I asked if he thought it might be something else. Dr Google had come up with brain tumour and Multiple Sclerosis as possible culprits. When I mentioned MS he said ‘I was thinking that’. Great. I went to the GP that day. He was running late and was uncharacteristically stressed. He arranged for some blood tests the next day and a CT scan which could take 6 weeks. He gave me a sick note for a week and that was that. Even greater!

My balance was even worse the next day, Friday 28th. It was making walking difficult and affecting my gait. My speech was also affected—it was slurred and stuttery and I was struggling to find words. I was very frightened. The nurse who took my blood has met me before and was fabulous. She listened to me and arranged for me to see another doctor who was also fabulous. She sent me to hospital. There I had more blood tests and they arranged a MRI scan but it was too late in the day for it to be done and because of the long weekend it won’t be done til Tuesday. That should give me a diagnosis.

I’ve been back to hospital because my walking deteriorated so much and I was terrified I was having a stroke and about to die or have a brain tumour and will be dead by Christmas. A CT scan was all they could do on a Sunday and that was fine which at least means I am very unlikely to have a brain tumour. They sent me home again as I am better off here. It was horrendous in there. Chris had to find a wheelchair to get me from the ward to the car park.

Today I have woken with a tremor. I am cruising the furniture like a toddler. I can’t stand upright or my knees buckle. I am using a walking pole around the house. Chris is fixing up the outside loo (which was full of wellies, kayak seats, buoyancy aids and random junk) so I don’t have to go upstairs too often. We are talking about where you get wheelchairs from. I am forcing myself to stay off Dr Google. We are crying a lot. We are both terrified. We are in shock—how could I go from being a fit healthy running, cycling, diving, dancing, working midwife to this wreck of a woman in two weeks?

Tomorrow I go for the MRI and maybe other tests, I’m not sure. Hopefully we will get a diagnosis. Maybe this will resolve and I’ll never know what it was. That is feeling increasingly unlikely. MS feels like the least worst option—better than a brain tumour or Motor Neurone Disease anyway.